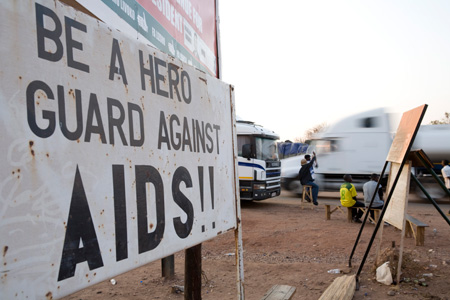 The following post was written by North Star`s Director for Donor and Partner Relations in North America, Georgie Kovacs Barden

Last year at this time, I had just returned from my honeymoon and was excited about starting my new job at North Star. My task here in New York City has been to find donors who want to provide much-needed health care to Africa’s mobile populations. None of us could have foreseen the bumps in the road ahead.

“My first ‘aha’ moment came while trying to sell the North Star concept. Sure, everyone agrees that building roadside clinics along transport corridors is the optimal way to reach mobile workers – in this case, long distance truck drivers – who might be HIV-positive, living with tuberculosis or affected by malaria and other diseases. Everyone agrees that the nature of their job, which includes weeks away from home, makes them susceptible to all sorts of communicable diseases and, in turn, more likely to transmit infections to others. However, there is no agreement on, “Who is responsible for paying for their healthcare?”

The second ‘aha’ was realizing that it was time to focus on the quality of our clinics rather than quantity. Driven by evidence and knowing the health risks associated with mobility, we set off to build as many clinics as possible. However, given our smallish size, focusing on both quality and quantity at the same time proved challenging. The good news is that we have expanded access to health care through 22 clinics in 10 countries, reaching nearly 200,000 people. But the balance must now shift slightly from access to the other side of the health care coin – improving quality.

The third proves to be the toughest to overcome – matching a donor to our cause and, in the long run, offsetting that donation sustainably. I never thought this would be easy, but who would have guessed it to be so difficult? We deal with marginalized people who, for many, do not evoke great empathy; and even those who are empathetic, in some cases, believe that this is the job of governments. As if that is not tough enough, add the ongoing debate about whether to charge for health services (and risk reaching fewer people) or offer free services – but somebody has to pay for them – to maximize the number of people treated and cured.

I can tell you till I am “North Star blue” that what we are doing is needed and we have succeeded where many have failed. However, that does not change the fact that we are competing with thousands of other non-profits for rapidly dwindling funds. Corporations are going to donate to organizations that match their agenda, which is a sound business judgment. Governments tend to prefer the established PSI’s and PATH’s of the world rather than to take a chance on smaller organizations. Also, the big foundations already have their favorite charities.

Let’s face it, it is much easier to sell “clean water” or “save a child” than to explain North Star. A cute baby and her hungry mom pluck more heartstrings than do a middle-aged truck driver and sex worker. That’s just the reality, and we get it.

North Star will continue, full steam ahead, to work with our partners and chip away at the roadblocks to sustainability. We have come too far to turn back.