Tea is one of the most popular drinks around the world – but how many people think about where it comes from? While countries like China and India might come to mind, the reality is that much of the tea we consume globally is grown and packed in Africa and put up for auction in Mombasa, Kenya.

This week, a new documentary produced by the BBC, The Tea Trail with Simon Reeve, follows the tea production process through East Africa and looks at the impact the industry has on millions of people who “pick, pack, and transport our tea”. As part of the documentary, host Simon Reeve paid a visit to one of our busy Roadside Wellness Centres, located in Salgaa, Kenya.

Each night in Salgaa, as outreach workers distribute thousands of condoms to truck drivers and sex workers, and use the opportunity to speak with them about their health, many others visit our Roadside Wellness Centre to have their health checked, and to receive testing and treatment for a range of illnesses including HIV and other sexually transmitted infections.

In a region of the world with one of the highest HIV prevalence rates, disease hotspots like the truck stop in Salgaa, play a tremendous role in the spread of disease, and are increasingly recognised by governments and international organisations as an important focal point for health intervention. During the segment on North Star Alliance work in Salgaa, our Project Officer, John Mochama explained why:

“If you are going to have any intimacy, you need to be safe… [This is a key issue] among truck drivers and key populations; and who are the key populations? Truck drivers interact with sex workers. They spend so many days, and months, away from their families, so you find that most of them end up engaging in extramarital affairs.”

The reality is, however, that the insatiable global demand for products like tea, result in often under regulated supply chains that in turn help fuel global epidemics. From our end, we are proud to be playing a role in ensuring that this doesn’t happen by providing health care and health information to truck drivers, sex workers and others living or working near Africa’s truck stops and borders.

Of course, we are a small part of this very fascinating documentary and we’d highly recommend that all those with access to BBC Two take the opportunity to watch it. 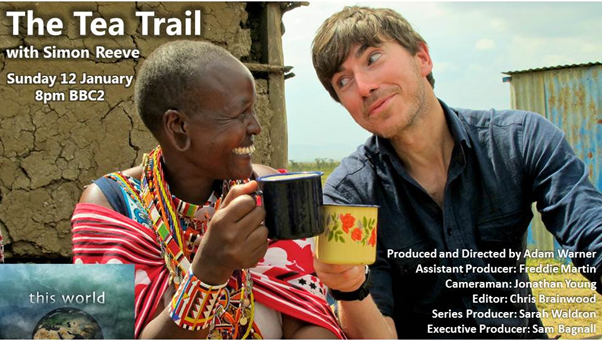 [box]Adventurer and journalist Simon Reeve heads to east Africa to uncover the stories behind the nation’s favourite drink. While we drink millions of cups of the stuff each day, how many of us know where our tea actually comes from? The surprising answer is that most of the leaves that go into our everyday teabags do not come from India or China but are bought from an auction in the coastal city of Mombasa in Kenya.

From here, Simon follows the tea trail through the epic landscapes of Kenya and Uganda and meets some of the millions of people who pick, pack and transport our tea. Drinking tea with everyone from Masai cattle herders to the descendants of the original white tea planters, Simon learns that the industry that supplies our everyday cuppa is not immune to the troubles of the continent – poverty, low wages and child labour.[/box] [box]

Residents in the UK, along with other BBC iPlayer subscribers, can view the full documentary for the next few days on BBC Two’s “This World” website.[/box]