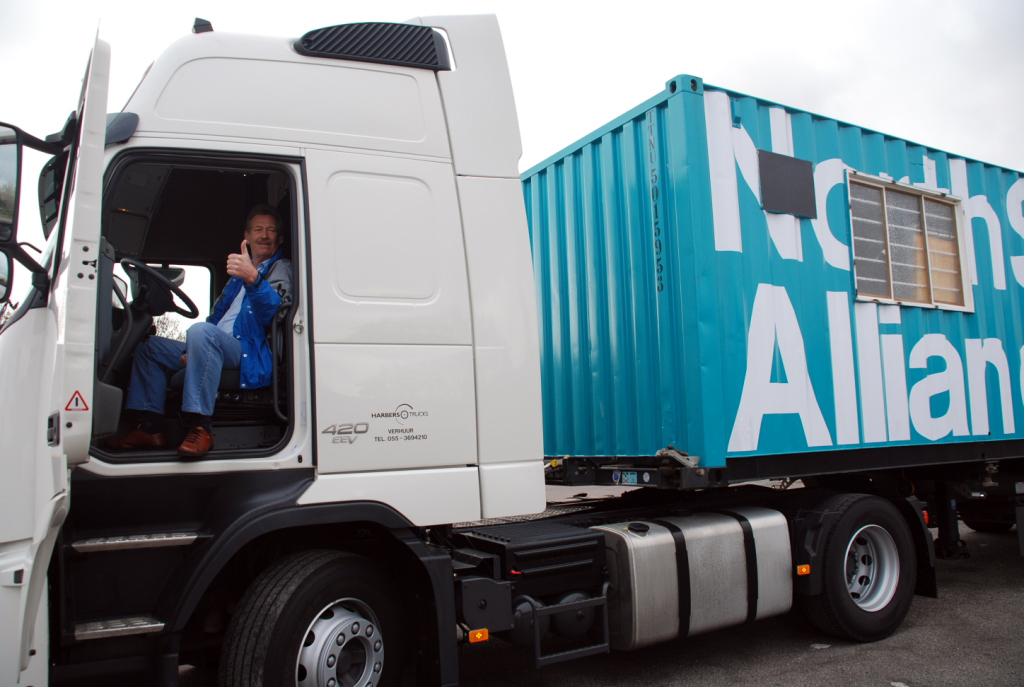 This is the second post written by Rosanne Bonanno, Senior Communication Manager at TNT, and Project Manager for the TNT/North Star Alliance Road Show

Willem was 20 years old when he started working for TNT as a long-haul truck driver in the Netherlands. Now 62 and semi-retired, he looks back nostalgically on 40 years spent on the road.

“Truck driving has always been like a holiday to me,” he said. “There are fewer places where I would rather have been over the years than driving my truck.”

I joined Willem recently during one of his countless journeys, hoping to catch a glimpse of life on the road for a European truck driver. We travelled from Switzerland to the Netherlands, following a successful launch of the North Star Alliance Road Show in Geneva. We had brought the model wellness centre to the Annual Fleet Forum Conference, the World Health Organisation and UNAIDS, a North Star core partner. More about the road show later.

Over the years, Willem has driven through countless European countries and has slept many a night in his truck. In the 24 hours that we travelled together, he animatedly recounted stories of robberies and road accidents, all while hand-rolling cigarettes and expertly manoeuvring the steering wheel of his dauntingly large 40-foot vehicle.

“The open road feels like home,” he told me. “It’s relaxing and familiar.”

I couldn’t help but compare Willem to another long-haul truck driver I met recently in Malawi, Africa. At 45, Edward has been traversing crowded African corridors for more than 20 years. He spends 26 days a month on the road, occasionally facing hazardous situations: he lost a finger recently while fighting off knife-wielding thieves. I spent six days travelling with Edward in order to capture his life in a documentary film. It became clear to me that he, too, feels at home on the road. There’s a comfort in the routine of his travels, he said. He whistles softly to himself to pass the time.

I expected glaring contrasts between the lives of these two drivers. But despite the continental divide, their work lives are not that different – with perhaps one exception. Edward and other African drivers like him suffer from a range of ailments, from malaria to hypertension. They have twice the HIV infection rates compared to the general population. They are so frequently on the road that they fail to access more conventional healthcare.

The North Star Alliance Road Show, now travelling through Europe, is designed to engage drivers like Willem, who understand the challenges (and joys) of being a long-haul truck driver and are in a position to help by spreading the word about driver health.

The 40-foot model wellness centre, painted in a distinctive blue, arouses the curiosity of onlookers – which is exactly what we want. Following on from Geneva, the container has travelled to the Amsterdam Medical Centre in the Netherlands, which is home to the PharmAccess Foundation, a future North Star partner and Dutch not-for-profit that supports HIV/AIDS treatment and care, mainly in Africa. The container then travelled to ORTEC, a provider of advanced planning and optimization software solutions. As a North Star core partner, ORTEC developed a registration system that allows the Alliance to track vital information about its wellness centre clients.

Road show visitors can see a live demonstration of the ORTEC system and can experience how an actual wellness centre operates ‘in the field’ in Africa. They can also get acquainted with Edward by watching a 6-minute film (part of a 22-minute documentary) that captures his life as a truck driver.

Since the Road Show kick-off, about 400-500 people have visited the container. It has stirred overwhelmingly positive reactions and prompted a range of questions from visitors, who want to know everything from what medications North Star dispenses to why truck drivers in Africa have such high HIV prevalence rates and how wellness centre staff are trained. This month, the Road Show will travel to 10 depots, hubs and head offices at the TNT Benelux and will then move on to other locations in France and Italy. More updates to come!