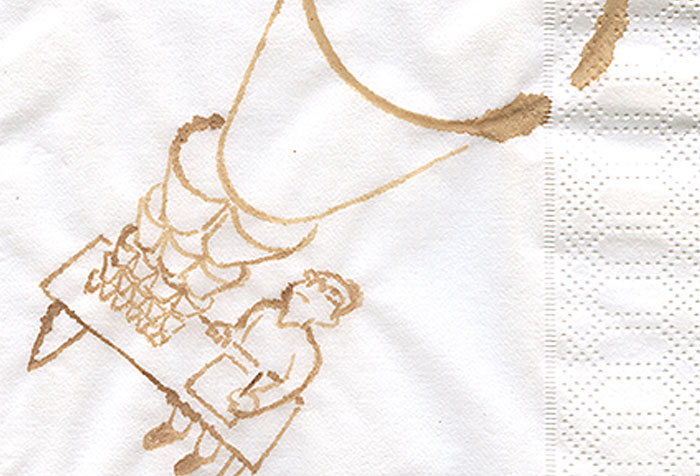 This is the first article in the “Napkin List series” written by Luke Disney, Executive Director of North Star Alliance.

A couple of years ago, I was sitting with my fellow directors Paul and Robin on a restaurant terrace in Maputo relaxing enjoying the warm salty air, giant tiger prawns and cool 2Ms. As we unwound from a long day’s travel and meetings we started laughing at the crazy things we had been through together setting up North Star. The more embarrassing the story, the harder we laughed. The stories were too funny to forget, so a pen was produced and a napkin was drafted into service as a notebook. The North Star Napkin List was born.

Of course,  we never thought of the napkin list as anything more than an inside joke (Although I did secretly consider using it to roast my unsuspecting colleagues at a North Star Christmas party in the distant future). But recently I’ve come to see an important truth behind the hilarity and guffas.

Organizations simply do not openly talk about their mistakes. Why? Fear. Fear of reputation damage, which would ultimately dull the competitive edge. The underlying logic is as follows: “If we admit to making mistakes (i.e. being run by humans) a) people will drop us/our products/services like a hot potato, or b) (even worse!) our competitors will use this information to improve their own products/services!” But do we really make ourselves less competitive by talking openly about our mistakes?

(Side note: there is a pernicious misconception that this paradigm does not apply to non-profits. Freed from the insidious grasp of the invisible hand, apparently relationships in non-profit-land are characterized by a spirit of cooperation and mutual support! I recommend a week’s internship at a non-profit for all those suffering from such delirium.)

Two months ago I was sitting on another terrace (I know, it’s a tough job), this one in Amsterdam, sharing a beer with Jeffrey Hollender. Earlier that day at the SOCAP Europe conference Jeffrey had given an impromptu talk on his experiences as a serial entrepreneur. I was struck by his concept of “total transparency”. Apparently at one of his companies he had kept a blog about all the mistakes they made as a company. He talked about bad decisions, and even faults in their products. When asked whether it had not hurt his company’s ability to compete his answer was swift and resolute: “On the contrary, it made us more competitive!” Hollender’s answer was based on a deep-seated belief in the intelligence of his customers and years of experience running businesses. He knew that his competitors were making mistakes as well, and, more importantly, he knew that his customers knew it too!

Failures and mistakes are an inevitable part of organizational growth, just as they are part of individual development. We all have ups and downs. Hiding your faults doesn’t make you more competitive, just less human and, therefore, less interesting. So pull your own napkin list out of your pocket/drawer/dust bin, take a deep breath, and spread the word. The worst that can happen is you’ll get a sore side from laughing. But more likely you’ll be reminded of your humanity and reaffirmed in your goals. And who knows, maybe you’ll end up helping a few other people in the process. Maybe that person sitting next to you on the terrace…

In the weeks ahead I’ll share some of my personal trials and tribulations building an organization – the good, the bad and the ugly. Hopefully you’ll find them interesting enough to share your thoughts as well – the good, the bad, and even the ugly!