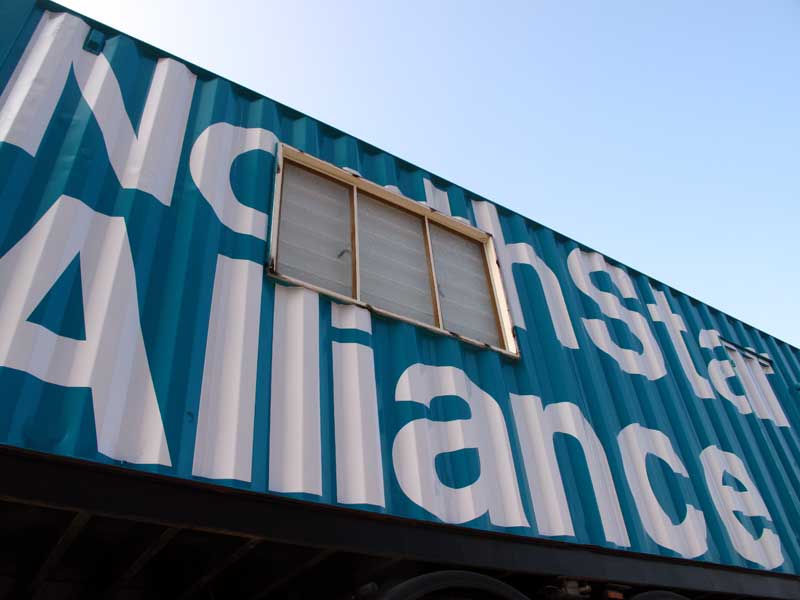 The following post was written by Rosanne Bonanno, Senior Communication Manager at TNT, and Project Manager for the TNT/North Star Alliance Road Show

It started on a dreary January day at the Dutch Port of Rotterdam. Shielded in a car from the driving rain, I waited impatiently while a 40-foot truck container was offloaded from a massive Maersk freighter. Hours later, I watched with pride as the distinctive blue container was driven out of the port by a shiny orange TNT trailer.

That was the beginning of my unique assignment – to take the North Star Alliance on the road.

North Star is a not-for-profit that builds networks of roadside wellness centres at transport ‘hotspots’ in Africa, enabling long-distance truck drivers and surrounding communities to have sustainable access to basic health care. TNT and the World Food Programme established the Alliance in 2005 as a means to address the spread of HIV/AIDS among mobile populations in Africa. Today, North Star operates 21 centres in nine African countries.

The purpose of my assignment is to make sure that more people within TNT, and among North Star’s other partners, know about the Alliance’s good work, and to allow them an opportunity to get involved. I’m doing that by literally taking a roadside wellness centre on the road. In the coming four months, the North Star centre will travel to TNT and other North Star partner locations in Belgium, Netherlands, Luxembourg, France and Italy.

I kick-started my assignment in Malawi, Africa – the site of North Star’s very first roadside wellness centre. Together with a cameraman and filmmaker, I followed 45-year-old Edward for six days as he did his job, driving from Malawi to Mozambique and back to deliver jet fuel.  Edward is a Malawian long-distance truck driver and the star of our film, ‘At the Crossroads’, which documents his day-to-day life.

Edward has passed by the North Star centre countless times over the years. Before the film, he had never visited the centre. Today, he still doesn’t know his HIV/ AIDS status. After six days of filming with us, he refused to have a test done. This is North Star’s biggest challenge – convincing drivers like Edward to take action today to safeguard their long-term health.

This week, I’m in Geneva, Switzerland, to entice members of the Fleet Forum and employees of UNAIDS and the World Health Organisation to visit the container. The free medical check-up is helping to pull them in! Next month, the ‘on the road’ adventure continues.

CategoryCampaigns and Events, From our Clinics
TagsPublic/Private Partnerships, Roadshow, TNT