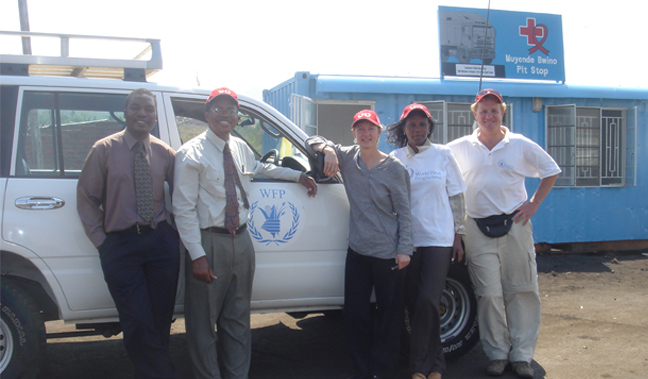 Mwanza Blue Box first opened its doors in 2005 and started as the flagship clinic of a brand new initiative led by the World Food Program (WFP) and TNT with a simple, yet unique, idea in mind: connecting hard-to-reach populations with essential health services.

Ten years after, the Mwanza Blue Box has been re-branded, renamed and repainted but still lies in the same place, in South-West Malawi on the border of Mozambique, standing proudly as the cornerstone of the North Star journey. In order to commemorate and celebrate our modest beginnings, let’s go back in time and dig up some of North Star’s past.

It all began in 2001, when WFP and TNT joined forces to improve logistics for food distribution in order to reach people living in Africa’s most remote areas. The execution of this strategy relied heavily on the work of truck drivers and their ability to travel long distances on bumpy roads from country to country, delivering essential food products to hungry populations.

In 2004, the operation took a new turn when a terrible famine struck parts of Southern Africa. At this moment TNT and WFP realised that there simply weren’t enough truck drivers to distribute the goods. Diseases like TB, Malaria, STIs, HIV and AIDS, already running rampant in Africa, were devastating truck drivers and putting an entire generation of workers at risk. Things even got worse when they discovered that truck drivers, due to the mobile nature of their profession, were also playing a key role in the spread of those diseases.

To prevent the situation from worsening and avoid potential future disasters, WFP and TNT sat down and came up with a breakthrough idea to solve the issue. With the precious help and expertise of the organisation “Trucking against AIDS” headed at the time by Paul Matthew (our current Southern Region Director), a pilot clinic was opened at a truck stop in Mwanza, Malawi.

Made from a converted shipping container, the very first Blue Box, named ‘Muyende Bwino Pit Stop‘ had a mission to provide essential healthcare services to mobile populations, stopping diseases in its tracks and laying the foundations of what would soon become North Star Alliance as we know it.

32 Blue Boxes, 12 countries and more than 1,600,000 smiling patients later, North Star is still fighting and striving to carry on a mission started a decade earlier, bringing primary health care services to the most vulnerable via its ever-growing network of clinics and hard-working staff across Africa.

Check out the full North Star’s story, narrated by our Executive Director, on ‘Our Story’ page.