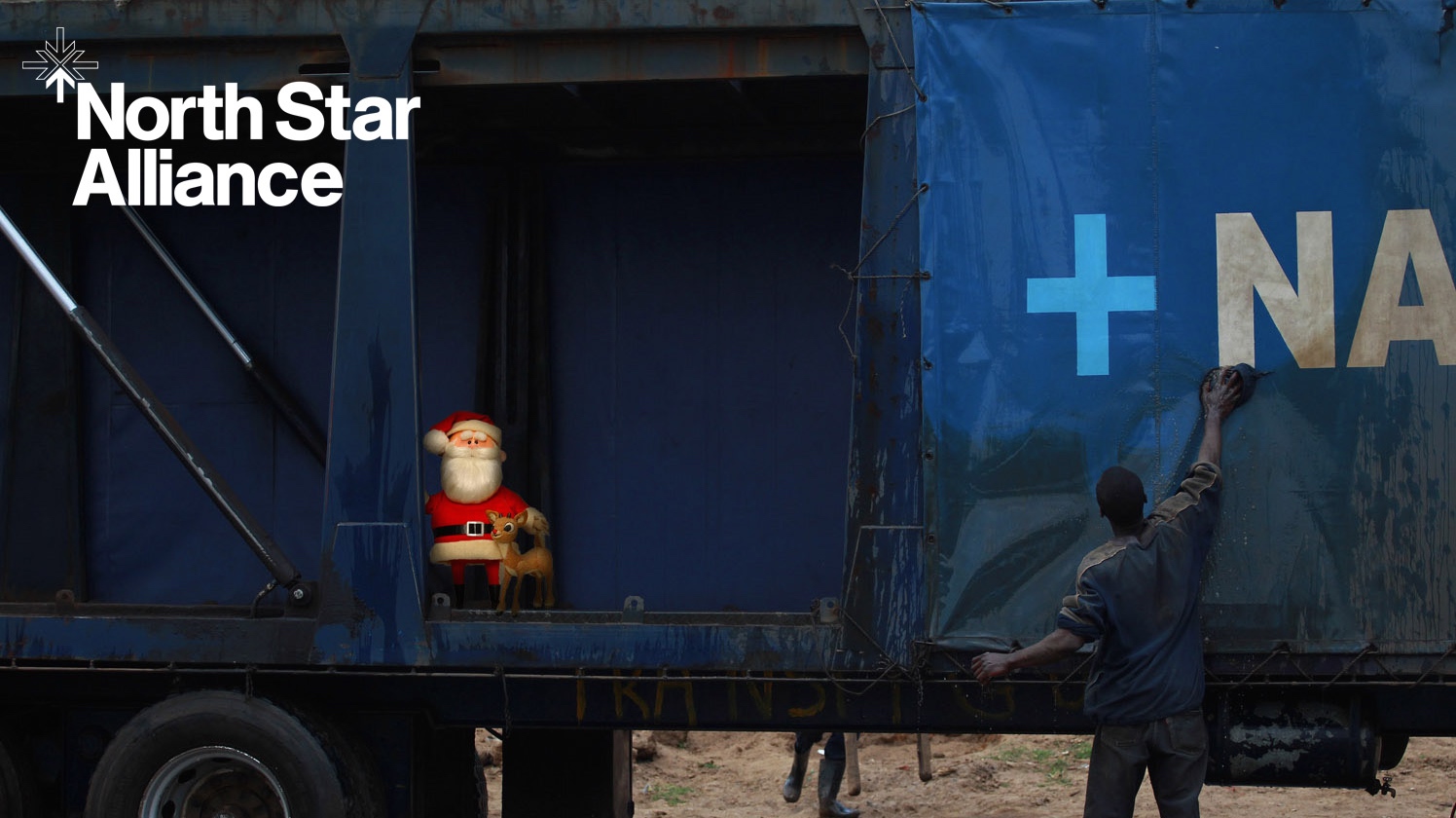 Today, as part of our Utrecht office Christmas coffee afternoon, our Director shared the following North Star Christmas Tale (with a nod to his Canadian Christmas tradition roots…)

Speaking of optimisation,
for you all I’ve got something of a realisation
Consider Santa Claus on whom we’re so reliant,
His journey is worthy of an ORTEC client
He has to take the shortest paths,
use time zone charts and fancy maths
To make the round in one big trip,
While making sure no homes are skipped
But there’s one detail that no one knows,
And this is how the story goes…

He left from the pole up north,
and got prepared to sally forth
First to Greenland then he looped around,
and started working his way down
Two hours before the light of day,
he would be left of Adelaide
Then with red sleigh and Noël regalia,
at six o’clock he’d leave Australia
When he’d ticked off Canada,
he clicked his heels and said “Fa la la!”
Then he looked south and saw,
he’d forgotten Africa!

“Next year I’ll need to bring help with me,
what with their rising GDP”
“But I figure I can still get it done,
make sure they have their Christmas fun”
He yelled to Rudolph: “As fast as you can!”
and in no time they were over Sudan
The reindeer flew hard and swift,
shame it was dark, they couldn’t see the Rift
Soon after he began his descent,
down into the dark continent

But by now his health was shot,
the reindeer too, worked to a snot
For this he was not well prepared,
the roads weren’t straight or lined up squared
He needed bearings but each address,
did not show on his GPS
As if that wasn’t bad enough,
the weather started getting rough
And so the forecast he did check,
Nairobi heavy rain warning in effect

His hands got sweaty he felt still fainter,
but then he spotted a Blue container
By the side of the road, he parked in silence,
And stumbled inside right after a client
As Santa sat in the waiting room,
he met a trucker on his way to Khartoum
“You’ve got a ways to go”, said he,
the driver nodded “I’m carrying food for WFP”

The heat! Poor Santa’s brain was fried,
luckily the nurse called him soon inside
She took his name and asked with glee,
when he’d last tested for HIV
Then out the window she glanced,
saw the sled where the reindeer pranced
Her face lit up in jubilation,
“You are most welcome sir, as a mobile population!”

Back outside Santa scratched his head,
two ladies asked him if he needed a bed
“Sorry ladies, I’ve got work to do,”
“Join the club,” said one of the two
“Have you got condoms in that sack?
“The big one you’re pulling behind your back”
“Condoms?” Santa started to shout,
“Yes,” she said, “the clinic is out.”

‘Twas then he saw the trucker from Khartoum,
walking in to a nearby saloon
After him old Santa ran,
maybe his health he’d find in a can
In no time at all Santa was one of the gang,
dancing and singing, feeling no pain
He had many a drink that looked conniving,
the trucker raised his eyebrow: “Aren’t you driving?”

By now he had fell way behind,
but African juju and reindeer combined
Makes magic that can’t be explained,
and can’t be seen and can’t be contained
And so he went and woke Rudolph,
and all the others that had dozed off
On Dasher, on Dancer c’mon boys,
no time for sleeping we ought to be delivering toys

To leave out all the trip details,
he finally got back over the ocean, following the whales
In record time, for on his mind,
was the Blue container he’d left behind
As for now, to the North Pole,
before Blitzen loses control
The reindeer let out one big squeal
and with that they flew home via Paris then Lille

When all the Christmas rush died down,
no elves and reindeer going around
Santa had all the time he needed,
his heart said go and he proceeded
He went back to Africa no doubt,
not sure how, I’ll leave that out
Right down across the Congo,
back to the container where he’d been not so long ago

Nobody knew, he left his red sack by the door,
When they tipped it open condoms spilled all over the floor