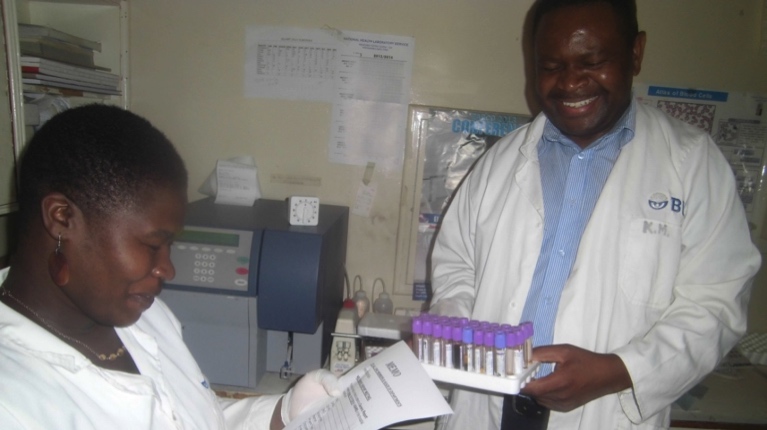 This week, we introduce you to Amon Tisibele, one of our Site Coordinators in Southern Africa.

Born at a small chrome mining location along the Great Dyke in Mutorashanga, Amon attended a local school up to grade seven primary level, and then began his secondary education at a provincial town in Chinhoyi, before completing it in Harare. Following this, he pursued an education in health, completing several courses and diplomas including General Nursing, Midwifery, Family Planning and Community Health, finally attaining his degree in HIV/AIDS Management and Community Development through Chinhoyi University of Technology.

Alongside his academic qualifications, Amon acquired a vast experience in health care provision through working across a range of levels at Health Care Institutions in Zimbabwe. He worked at rural clinics, urban polyclinics, district and provincial hospitals and central hospitals, where he held roles including District Community Health Nursing Officer, Acting District Nursing Officer and the Provincial EPI Diseases Surveillance Officer.

Feeling the pull of the NGO sector, Amon developed a specialisation in project coordination working with the orphans and vulnerable children project in the HIV/AIDS Care, Support and Treatment area for seven years. During this time, he met the North Star Alliance team and instantly “fell in love with their projects because they had a community health appeal, which is my passion.” When his local NGO ceased operations, he naturally joined the North Star team, where he has been for the past two years.

The typical daily operations at Amon’s RWC begin at around 10am with disinfecting and tidying. Clients then receive health talks, including group and individual Behavioural Change Communications (BCC), from the lay counsellor and peer educators, while the clinician begins to provide Primary Health Care (PHC) and HIV Counselling and Testing (HCT). As the Site Coordinator, Amon checks, monitors and coaches the three, and his medical qualifications allow him take over clinical duties as required. While all is wrapped up by around 6pm, Amon notes that the majority of clients come between 12 and 4pm, made up largely of local community members, sex workers and truck drivers.

His work may be challenging at times, such as when a simple lack of resources resulted in being unable to do planned outreach activities, however Amon is continually motivated by “the knowledge that we are providing critical health services that make people healthy and enable them to work for their families.”

Amon is particularly enthusiastic about our new service offering of Anti-Retroviral Treatment (ARV’s) to people living with HIV through the new North-South Corridor ART roll–out project;

“This activity has added much value to all our HIV treatment, care and support interventions,” says Amon, “Now we are testing clients for HIV, doing the CD4 counts, assessing the ART eligibility criteria and giving ARVs to those who need them free of charge. So far, in only two weeks, we have enrolled 14 clients on ARVs. This number will soon surpass 100 because of a number of community mobilisation activities we are conducting on a daily basis.”

On Ebola, Amon shares his recent successes working with key local stakeholders in the prevention of the disease, by setting up an Ebola Virus Prevention Task Force. The team have set up a screening centre at the border, along with an isolation site at the local government clinic, and at their weekly meetings continue to maintain functionality of this site, make recommendations to the district health executive, and procure and distribute relevant IEC materials on Ebola.

It’s the simple things that always bring him a smile; “When a client I am assisting says, Thank you. I love a thank you more than any monetary reward.”

Described by his friends as a “cool, mature, composed, experienced and a hard working fatherly gentleman”, Amon spends his free time “chilling at home with my family, listening to all news channels on TV, doing a bit of gardening and going to church on Sundays.”

For anyone thinking of joining the North Star team, Amon shares the following advice; “be humble, committed to produce results even when resources are scarce, love to work with others, and always have a positive attitude.”

Last question: which of North Star’s PIQuE core values (People, Integrity, Quality, Entrepreneurial Spirit) do you most identify with, and why?

“All of them because I work with stakeholders and always ensure that I do my work according to NSA protocols as well as policies and guidelines provided by the MOH. This in turn, ensures good services are provided through the continuous coaching, monitoring and evaluation exercises I do. Sharing of experiences and good practice help our organisation to get recognition, and is the key to attracting funding for future health programs.”