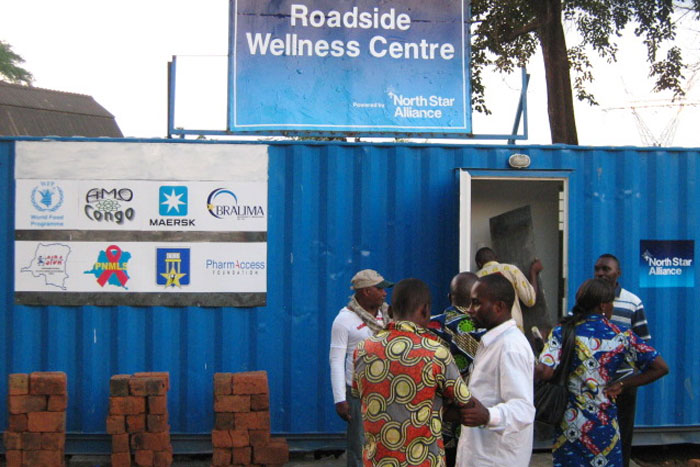 On the 31st of March, North Star officially closed our Roadside Wellness Centre (RWC) in Lukala, Democratic Republic of the Congo (DRC). Although news of new RWCs strengthening our network is always great to share, we believe it’s also important to look back and be open about our experiences with centres that did not prove to be as long-lived as we might have hoped.

Lukala, located in Bas-Congo, the western most province of the DRC, is located on the main road connecting the capital of Kinshasa to the river ports along the mouth of the river Congo. When looking at our network map, it becomes clear that Lukala is a relatively isolated site,  on a corridor on which no other RWCs are located. North Star was first invited to visit the area on a exploratory trip hosted by Heineken and the World Food Programme (WFP) in 2010. Both expressed interest in establishing a wellness centre in the region, and not much later North Star returned to the area to look for a suitable location. In order to withstand the chaotic, bureaucratic procedures to register the organisation and gain the necessary licenses, a partnership was sought with AMOCONGO, a respected local NGO in the field of HIV/AIDS prevention. The clinic became operational in February 2011.

Unfortunately, there were several factors that contributed to the RWC’s early closing. In hindsight, the location chosen for the RWC proved to be a major obstacle. Not only did few truckers and other members of our target group find their way to the clinic, the centre’s operational costs also proved to be far higher than other RWCs. Lukala’s far flung location meant support from the regional offices proved difficult, travelling there was expensive and supplying the centre with medicines troublesome. Furthermore, communication often proved problematic: not only were means of communication between the regional office, Kinshasa and Lukala limited, the language barrier caused delays and frequent misinterpretations. Supervision of the activities at Lukala therefore became extremely difficult, causing confusion both for the management as well as the clinic staff on the ground. Besides that, the cooperation between North Star and the local NGO proved to be relatively short lived. As a result, North Star, in close consultation with Heineken, decided to close the Lukala clinic, transferring the RWC to the Ministry of Health. Instead, North Star and Heineken will be focussing their resources on the RWC in Bukavu, a clinic in East Congo located on the Northern corridor.

We believe North Star has matured as an organisation since 2010. Whereas initially North Star would act on every opportunity, some perhaps more feasible than others, we believe we have now come to a point where we will only fully commit ourselves to a project when we can make sure we will live up to our intended standard. That being said, at Lukala we achieved something not many NGO would have succeeded in: we got a clinic up and running in arguably one of the toughest countries in the world, far removed from any lifelines. This is something to be very proud of, and we will ensure that the lessons learned during the last three years will be utilised when we expand into new markets (in fact, we already did in Mozambique). Many thanks go out to Heineken, who have supported our clinics in the DRC from the beginning. Finally, we would like to say a big thank you to our wonderful staff in the DRC, without whom this entire endeavour would not have been possible.