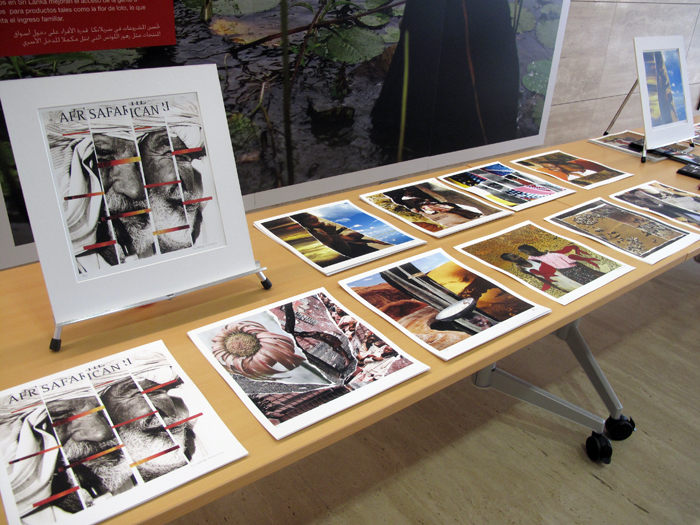 Last week, North Star Alliance and Art for AIDS International opened a large exhibition in collaboration with the World Food Programme at the Second Annual Global Agri-Knowledge Share Fair in Rome – hosted at the headquarters of the International Fund for Agricultural Development (IFAD), a UN agency responsible for combating rural hunger and poverty in developing countries.

The exhibit, which featured the recently launched North Star Alliance / Art for AIDS International portfolio, presented a large selection of artwork produced by truck drivers, sex workers, and young people from Harare and Beitbridge Zimbabwe, made during a recent workshop series hosted by Hendrikus Bervoets, Founder and Executive Director of Art for AIDS International.

The goal of this exhibit was to raise awareness about the impact of HIV and STIs on mobile populations, and on their direct and indirect contacts across Africa. Further, the exhibit highlighted the ways in which North Star Alliance and the World Food Programme are affecting change in this area.

“While Art for AIDS International has traditionally worked with young people, we realized it was important to recognize hidden links in the transmission of HIV in Africa”, explained Hendrikus.

Truck drivers, and the communities surrounding transport hubs, have traditionally lacked access to health care and information, and as a result, have been disproportionately affected by HIV and other diseases.

“By teaming up with North Star Alliance…we were able to adapt the Art for AIDS workshop model to bring important information, and hopefully a fun experience, to two communities heavily affected by these issues”.

The exhibit, which ran from 26-29 September, was well received with many people stopping by to purchase prints – the proceeds of which will support both Art for AIDS International and North Star Alliance projects in southern Africa.

We would like to thank IFAD, the World Food Programme, and Art for AIDS International for their support in this initiative. Here are a few pictures of the exhibit:

Stay tuned for the online launch of the portfolio next week. Until then learn more about the project by reading: Driving the AIDS Response through Art.