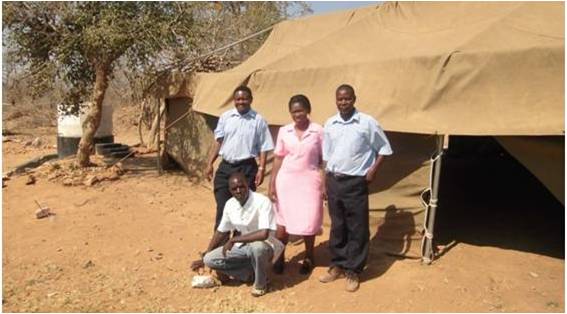 Right across Africa, Ebola is changing the focus of health workers and the environment that they work in. For our team in Chirundu South – a Roadside Wellness Centre located near the border of Zambia – the news of a confirmed case of Ebola in The Democratic Republic of Congo (DRC), a close neighbour through Zambia, brought the disease close to home.

Below we share with you a report on the team’s recent collaboration with the Zimbabwean Ministry of Health and District Health Team to initiate a local response to Ebola, protecting their community while educating locals and travellers alike on the realities of Ebola.

The RWC team in Chirundu South had been noting with concern the spread of Ebola in West Africa. It was reported that over 2000 people and over 200 health workers were affected and died of the deadly disease.
Following news that the DRC had a confirmed case of Ebola, the Chirundu South RWC joined hands with the District Health Team (DHT) to conduct emergency Ebola preparedness meetings in which the following strategies, aimed at preventing entry of the disease through the Chirundu border posts, were discussed and adopted;

• Ebola prevention and care training of Health Workers at the border post.
• Provision of protective gear at the screening point and government clinic.
• Regular support and supervision visits by the Ebola National Response Team from the Ministry of Health (MOH) head office, as well as the DHT and Provincial Health Executive (PHE).
• Opening of a screening area within the border post and immigration offices, to screen all travellers from West Africa and DRC.
• Conducting three urgent meetings for Stakeholders, Border Control Officials and the local community.
• Seconding extra staff (Environmental Health Workers) from the district to enforce port health procedures.
• Seconding the Chirundu South RWC clinician to man the government clinic while the clinic nurses were seconded to the Ebola Screening site.
• Daily health education on Ebola to clients visiting the RWC and government clinic.

Results of the strategies
• Currently, over 90 people/ travellers (mostly males) from DRC and West Africa are screened on a daily basis at the screening point.
• So far there have been no suspected cases of Ebola detected since initial reports.
• All clients are issued with information on Ebola through via leaflets/pamphlets.
• All clients are issued with special slips that indicate that they have passed through a formal Ebola screening point.
• Daily health education on Ebola is provided to clients who attend the RWC and/or government clinic.

Conclusion
Credit is given to all health workers who have worked hard, and continue to do so, to ensure Ebola does not enter Zimbabwe through the Chirundu border. We hope and trust that the zero case detection rate remains until the outbreak in West Africa is contained. We hope the 300-strong local community, 20 stakeholders and 20 health workers trained will continue to be vigilant with Ebola surveillance. Challenges of inadequate protective gear at the RWC and lack of transport to ferry a suspected case from the screening point to the treatment centre need to be addressed. There is need more training and drills to be conducted as Ebola is a new condition that has never been experienced in Zimbabwe.

The screening form used at the border screening site.

Protective gear used for all suspected cases of Ebola.

Clinician, Collen, seconded at the government clinic for TOR.