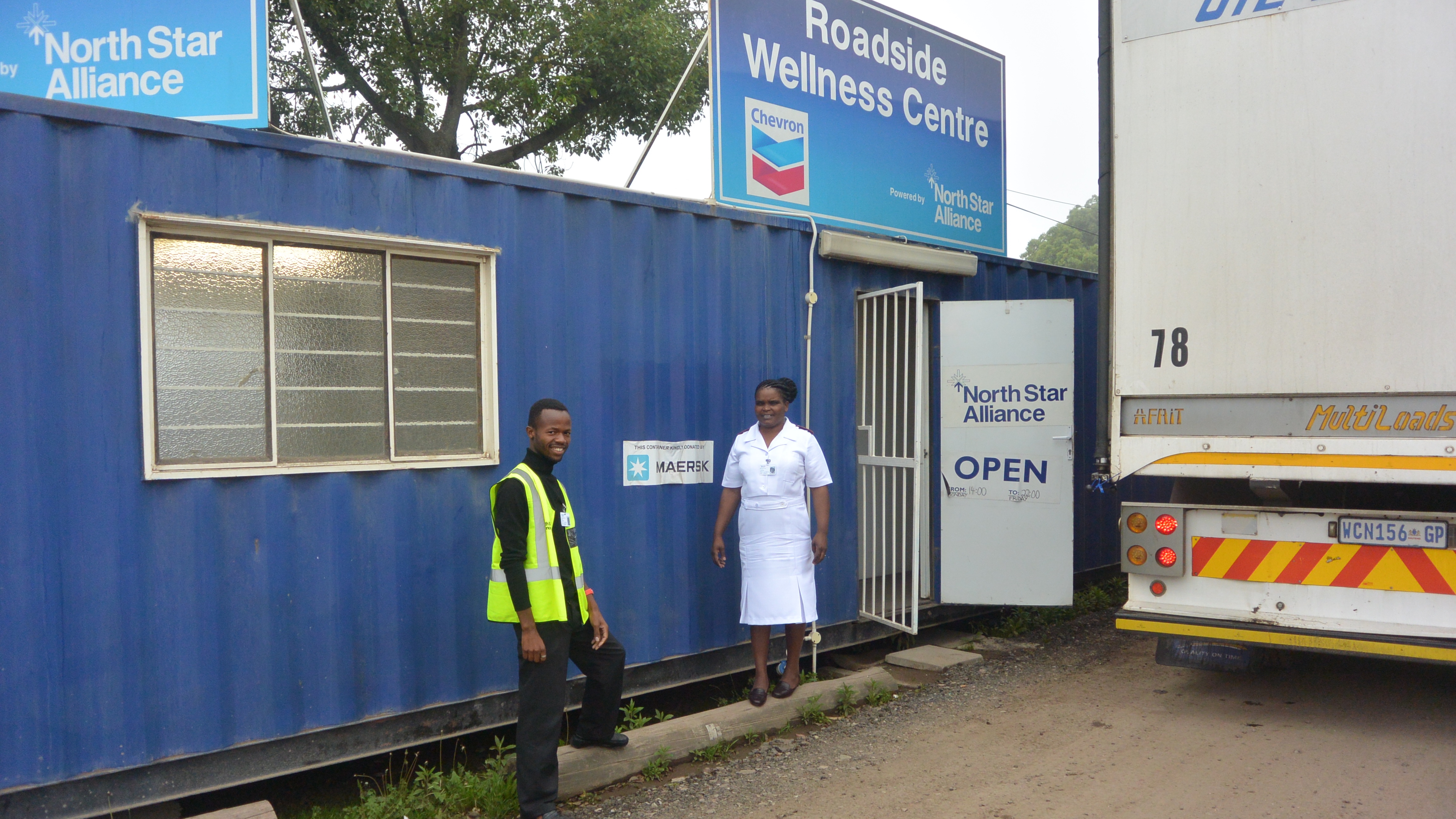 Following on from our piece in the Dutch newspaper, Trouw, last week, below is a translated version in English with thanks to our amazing volunteer translators, Geert, Uschi, and Lorraine.

Photo Caption: A North Star Alliance “wellness container” in Kenya, where people on the move can drop in with their health-related questions. PHOTO: JEAN-PAUL BERVOETS

Liberian truck drivers hired by the UN World Food Programme (WFP) drive in and out of quarantine areas in this Ebola-stricken country. They bring in food supplies, but the question is: what do they bring back with them? Ebola?

Worried by this, WFP approaches North Star Alliance, a Utrecht-based organisation specialising in healthcare for “mobile workers”. Executive director Luke Disney hesitates, asking himself if he would now have to travel to West Africa.

“The entire healthcare structure in Liberia, and in Sierra Leone too, has crumbled since the emergence of the Ebola crisis”, Disney explains. “Doctors, nurses, hospitals – they are all turning away patients for fear of contamination; clinics have shut down completely. The government has reallocated resources in order to deal with Ebola. An understandable move, but there was so little capacity to begin with: Sierra Leone has only one doctor per 100,000 people. Ebola is drawing attention away from other diseases, like malaria, diarrhoea, HIV and AIDS.

“UNAIDS has studied how the Ebola outbreak has affected the treatment of HIV. People can’t get their antiretroviral drugs. It’s a disaster. In the first four months of the outbreak, Ebola killed around 5,000 people; during the same period, malaria was responsible for the deaths of 8,000 people – in each affected country.

“We can see that our services are badly needed in Liberia and Sierra Leone, and we really do want to go there – just not as part of the Ebola response. We want to do our work, together with the government; but that’s not possible while the government is solely focused on Ebola.”

At the turn of this century, WFP was working to fight a food crisis in Malawi in southeast Africa. Food supplies destined for this landlocked country entered through the harbours of neighbouring countries and had to be transported over land to Malawi; this required truck drivers. Disney says, “Every two years, WFP studies the situation in vulnerable countries: what is the condition of the harbours, the roads, the drivers? From this study it emerged that there should have been enough drivers in Malawi; this was not the case however. WFP concluded that there was a problem and that problem was HIV: AIDS had wiped out 20 percent of the truck drivers. What’s more, WFP saw that the corridors along which the food supplies were being transported were the routes taken by diseases to enter remote villages.”

At that time, Disney was employed by postal operator TNT, a company working together with WFP as part of its social responsibility programme. By way of a pilot project, they placed a freight container, painted blue, on what Disney refers to as a “hot spot” on the border between Malawi and Mozambique.

“Truck drivers are on the road for 10, 20, 25 days. Much of this time is spent waiting for a parking space. They face a myriad of regulations and, if they are unlucky, it can take ages before they get the official go-ahead. I once saw a truck on the border between Benin and Nigeria that literally had grass growing around the tyres: the driver had been stuck there for three months. But even if the wait is only for 72 hours, this is very stressful.

“The drivers are given money by their boss before they leave to be used for everything they need along the way – petrol, food, bribes. These young men and their cash attract people from all the villages in the vicinity, including women looking for ways to earn some money. It is here that high-risk carriers, the sex workers, transmit HIV to the intermediaries, the drivers, who bring it home with them. That’s how the disease spreads.”

From the pilot emerged North Star Alliance, with Luke Disney at the helm. The alliance now has 30 containers spread over 12 countries in southeast Africa. Gambia also has a clinic. More than 170 people work for the alliance. Disney says, “Six work in the Netherlands and the rest are local people; we don’t employ expats in Africa”. In 2013, the clinics were visited by 283,784 people.

Given the sensitive nature of HIV right now, how can it be that so many people visit the clinics? “We do not present ourselves as an HIV clinic, but rather a ‘wellness centre’. In Africa ‘wellness’ stands for general good health. We also treat patients with the flu or for a burn, for example – all for free.”

Truck drivers are the core business however, and prevention is the primary aim says Disney: “Once a year we ask them ‘How are you doing? What are your concerns? What do you want to get out of life?’ You build up a relationship of trust and then, over time, you start discussing other things. For each patient we compile an electronic medical passport that can be accessed in any of our clinics by the patient using his or her fingerprint. This didn’t get passed the Netherlands, but we use it here and it works.”

Disney is convinced that these clinics are needed in West Africa too. “Just read the UNAIDS reports on Liberia, Sierra Leone and Guinea: in all three countries, HIV is two to three times more prevalent among truck drivers than in other groups. There is work for us, as there always has been, but now with Ebola that group is drawing attention. This is difficult for us given that we are not an emergency aid organisation. How do we get the right personnel? That’s always a challenge, even in times without Ebola.

Next week Disney will be sending a team – for the second time – to assess the situation. “We want to build a sustainable relationship, with the government and with the people. If there is no foundation for that, we simply won’t go.”